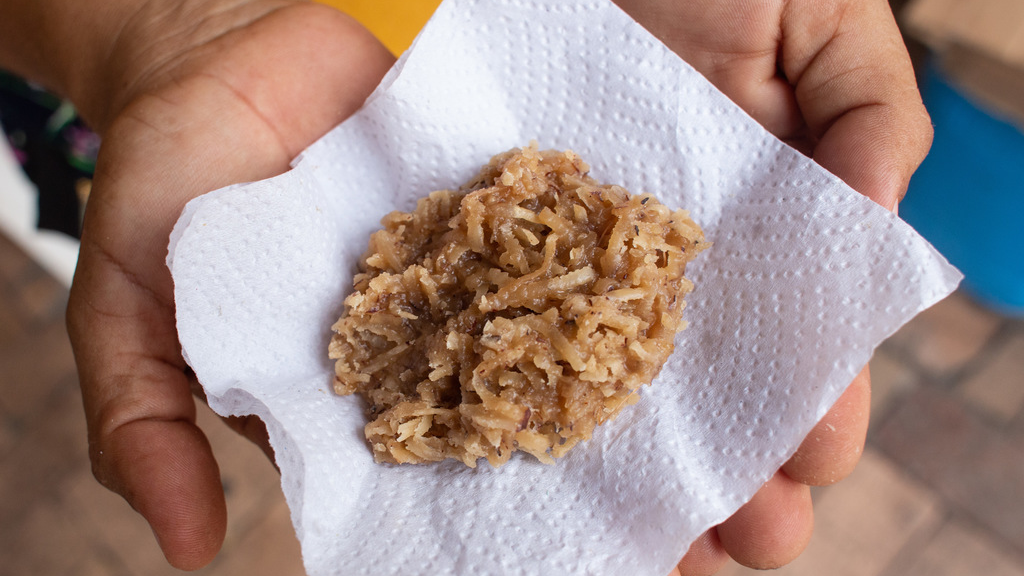 Searching for the Caribbean in Cartagena

Laura Dowrich-Phillips spent a week in Cartagena, Colombia, as one of 15 fellows at the seventh edition of the Gabo Fellowship in Cultural Journalism held by the Gabo Foundation in conjunction with the Ministry of Culture of Colombia and with support from the Universidad Jorge Tadeo Lozano. There, she was tasked with providing a written piece that was critiqued and edited by an expert panel comprising senior cultural journalists Jonathan Levi, Hector Feliciano, Jason King and Alejandra de Vengochea. This is the final product.

Across the highway from the Ibis Marbella hotel in Cartagena, the waves of the Caribbean Sea roll and break on dark brown sand.

But is geography enough to make Colombia’s fifth-largest city Caribbean?

“I consider myself a Caribbean woman,” declares Kandya Obezo, a young Palenque woman.

For Obezo, who works with the Chamber of Industry and Commerce, the way people in Cartagena live and eat infuses them with a Caribbean essence.

“The way we speak, the way we treat each other, our culture and our food is very Caribbean. Every meal we use here has coconut.”

Obezo is originally from San Basilio de Palenque, an hour outside of Cartagena, the first “free town” in the Americas, founded by freed slaves more than two hundred years before Colombia achieved its independence.

Over one million African slaves were shipped to Cartagena in the nineteenth century when the city was a major port in the Spanish empire.

In Palenque, the descendants of those freed slaves have held on to cultural traditions found among descendants of African slaves throughout the Caribbean. The women, known as Palenqueras, create, among other treats, sweets from coconuts called cocadas, grated coconut boiled in sugar and fruit flavours such as Papaya, Pineapple and Guava. In Trinidad, we call these treats sugar cakes.

In Portal de los Dulces, a strip near the clock tower in Cartagena’s famous tourist attraction, the Walled City, jars of cocadas and trays with a colourful assortment in different flavours fill tables lining the corridors.  There are also jars of sesame seed balls a popular Tobago sweet known as Bene Balls. Another familiar sight on that row of temptation are Tamarind Balls, tamarind rolled in sugar, a sweet yet tangy snack popular across the Caribbean.

Palenqueras, who walk around with bowls of fruit on their heads and urge you to pose for a picture with them for a fee, are big attractions in the walled city. Their colourful ruffled dresses, often in the national colours of Colombia, are similar in style to the traditional wob diyets Dominican and St Lucian women wear for Creole Day.

In the Portal de los Dulces you can find cocadas, coconut sweets known as sugar cakes

On my first day walking through the city, a group of Palenqueras makes a beeline for me, a black face among the sea of tourists, calling me “familia” as they view me with wide expectant smiles. One places her surprisingly heavy metallic bowl filled with plantains and pineapples on my head.

Palenque is also the birthplace of Champeta, the musical mixture of West African Soukous and Calypso, Soca and Reggae from the Caribbean.

Charles King, a Champeta singer, says he was inspired by the music of calypsonians such as St Vincent’s Beckett, Montserrat’s Arrow and soca bands such as Antigua’s Burning Flame and Jamaica’s Byron Lee and the Dragonaires. On the reggae side, Bob Marley, Peter Tosh and Gregory McGregor provided inspiration too. The influences are reflected in the way Champeta singers deliver their lyrics. Urban Champeta today favours dancehall music.

Despite the signs of the Caribbean influence in Cartagena, people from Colombia’s Caribbean island of San Andres, off the coast of Nicaragua, do not think the colonial city qualifies as Caribbean.

In the Plaza outside the Walled City, vendors play their trade

Once colonised by the British, the natives of San Andres speak English and identify more with their Caribbean counterparts than they do with continental Colombia.

“We have the same dishes like you. You eat oil down, we call it rundown, coconut milk, fish, stew conchs, rice and beans, breadfruit. San Andres is a Caribbean island, we speak English; it is our mother language. We listen to reggae and soca,” says San Andrean Augustina Forbes Evans, a background vocalist with the reggae band Jobsaas and the Hearthbeat. “We used to have a connection with the rest of the Caribbean and it was lost but now we are trying to reconnect.”

“Our language and our gastronomy is linked to the Caribbean. They don’t speak what I speak, they don’t eat what I eat.”

Recognising the need to connect with the region culturally, Rafael Ramos, founder of the annual Caribbean Cultural Market, says he has travelled to Trinidad and Tobago for Carifesta in August to meet an organisation of Caribbean artists.

Carifesta is a bi-annual celebration of arts and culture that in 2019 brought together 23 Caribbean countries for 10 days in Port-of-Spain where each country showcased its music, food, art, theatre, dance, the written word and artisanal products.

“We talked about implementing the Market there and they are very interested in establishing a relationship. We are in conversation so in 2022 we might have a side of the Carifesta right here. We are working on it but it is cheaper and easier to fly to Europe than the Caribbean, he says. “We have the same territory and culture but we are so far away,”

Cartagena is indeed far away thanks to a lack of direct travel from the islands, but in the Plaza outside the Walled City, watching Colombians hustle home after a long day of work, the scene feels familiar.

On the sidewalk, men are selling juice in glass cases with ice in hopes that passersby would need to quench their thirst. Diagonally sliced papaya, mango and watermelon in clear plastic bags are on sale on numerous fruit carts and a row of bored-looking men sit with typewriters waiting to type up a much needed official document next door to a row of booths selling an assortment of flowers.

Jobsaas is a reggae singer from San Adreas, a Colombian island that identifies more with the Caribbean

Everywhere, people are on their hustle to earn pesos, reminiscent of Charlotte Street in Port-of-Spain where brick and mortar stores jostle for sales with street vendors plying everything from underwear to food.

“In the University we had a teacher who said the Caribbean isn’t the kind of thing you can define. When he said that, I realised the Caribbean is not only sea, it’s not only beach, it is a new world” says Emmanuel, a drummer for the Pedro Rock band.

“It is the only place in the world where you can find the roots of three races, native people, white people and black people. Only for that, it is a new world.”

This article was originally published on Loop News (https://tt.loopnews.com/content/searching-caribbean-cartagena)